On October 17, 1897, a fire spread through the town of Windsor, Nova Scotia, destroying most of the town, including both St. John’s Presbyterian Church and Windsor Methodist Church, and leaving most of the residents homeless. You can read more about the fire by clicking here. The devastation felt by the town is well summed up in a statement to the editor of The Presbyterian Witness by Rev. Henry Dickie of St. John’s Presbyterian Church:

“Last Sunday morning at 11 o’clock our people gathered for Public Worship in the Assembly Hall of the ‘Church School for Girls.’ The Hall was seated for about 200, and every chair was occupied. It was a very pathetic meeting. The terrible experiences of the previous week had completely changed things. Our beloved church was in ashes, the majority of our homes, and all our places of business had perished in the flames, and it seemed as if we had barely escaped with our lives. Is it any wonder that there were few dry eyes in our assembly? and that looking at one another through our tears an unspeakable tenderness seemed to fill every hear. After all, there is nothing like affliction and trouble to ‘break every barrier down,’ and to make us realize our kinship with one another, and our dependence upon God.” 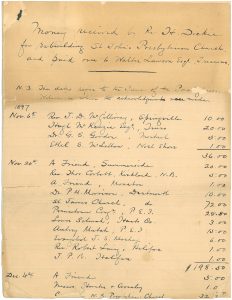 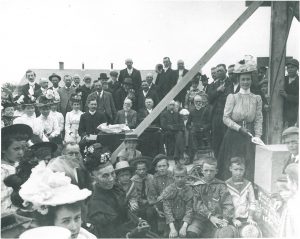 Crowd at the laying of the cornerstone service for St. John’s Presbyterian Church,, 1899

Despite this major setback, the congregation members soon set upon the process of rebuilding and the cornerstone of the new church building was laid on June 19, 1899. Rev. Dickie, along with several other guest speakers, addressed the crowd of 300 or 400. The Hants Journal (June 21, 1899) reported that the “ceremony was one of the best we have ever attended. The addresses were short and in an exceedingly happy vein, and were evidently enjoyed by those who heard them, as was evident by the frequent applause indulged in.” After the ceremony, refreshments were served from the nearby building which the congregation had been using as a temporary meeting place. Later that the evening, guests were treated to a concert by Mrs. Kennedy Campbell from the Fort Massey Presbyterian Church choir.

The new church as designed by Elliot and Hopson of Halifax was made of wood and had a seating capacity of 550. Large doors separated the meeting room from a Sunday School room which could seat about 350 (The Presbyterian Witnesses, June 17, 1899). Joseph Taylor of Falmouth built the church at a cost of approximately $17 000 (The History of The United Church in Windsor by E.L. Eaton, 1981) 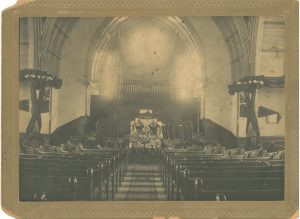 The interior of St. John’s Presbyterian Church decorated for the dedication service, September 1900

By February 1900, Rev. Dickie was reporting that the outside of the building, except for the spire, had been completed and the new building was dedicated on September 2, 1900, almost 3 years after the fire. Windsor Methodist Church was also dedicated in that same year.

Today, Windsor United Church continues to worship in the St. John’s building, which stands as a testament to the dedication and perseverance of those church members from so long ago. 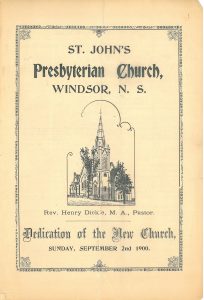 Order of service for dedication on September 2, 1900