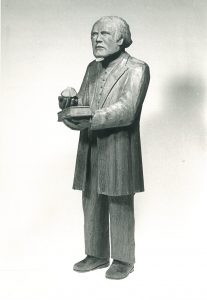 Methodists had been active in the Amherst-Point de Bute-Sackville area since at least the 1780s when William Black, one of the fathers of Methodism in the Maritimes, began preaching in the area.

In the early days of Methodism in Cumberland County, Parrsboro was linked with Maccan in a circuit which covered over one hundred miles (including Parrsboro, Maccan, Maccan Mountain, West Brook, Amherst, Head of Amherst, Shinimiacas, Cross Roads, Woodstock, Diligent River, Fox River, New Canann, Advocate Harbour, and Five Islands). The Methodist congregation in Amherst worshiped at the Baptist Church built in 1819 and then moved to the Court House in 1824. It was not until 1841 when the first Methodist church was erected in Amherst. Amherst became the head of a Methodist circuit in 1847. When the Nova Scotia Methodist Conference was organized in 1874, it was divided into six districts, one of which was the Cumberland District.

Methodism in Sackville began in 1772 when a number of English immigrants, who had been converted by John Wesley, moved to the area. The first Methodist church in Canada was erected at Pointe de Bute in 1788. The second Methodist church in Canada was built at Sackville in 1790. Originally, Sackville had been connected with the Cumberland and Westmorland circuits but became its own circuit in 1812. William Black visited the Petitcodiac area in 1781 and it became the head of a large circuit, covering all of Albert County and a large part of Westmorland County, and was later divided into seven or eight circuits. Coverdale was the head of this circuit until Moncton became the head in 1848.

The Presbyterian Church in Cumberland and Westmorland Counties

Dr. Alexander Clarke was largely responsible for the spread of Presbyterianism in the Amherst/Sackville area. He was sent to Canada by the Reformed Presbyterian Synod of Ireland and arrived in Saint John, New Brunswick in 1827. The earliest Reformed Presbyterian or Convenanter congregation in New Brunswick and Nova Scotia was established before 1830 in Shemogue. Construction may have started on a church building as early as 1829 and the first communion service was held on July 3, 1831. By the 1840s, Presbyterian churches had been established in Little Shemogue, Goose River, Port Elgin, and Amherst with mission stations being set up in other communities. 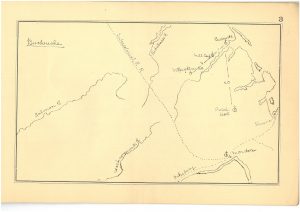 St. John’s Presbyterian Church in Moncton (now St. John’s United Church) was the first Presbyterian congregation in the city of Moncton. In 1857, St. John’s status was changed from an ordained mission charge to the status of a fully organized church. This church along with the other churches in the Moncton area were part of Saint John Presbytery which covered a large geographical area in the province of New Brunswick. Upon church union in 1925, the churches in the Moncton area became part of Moncton Presbytery. 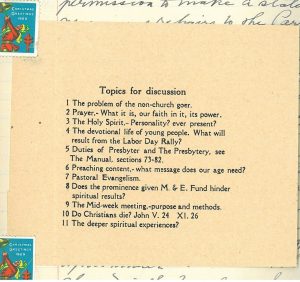 Topics that were discussed at a meeting of Cumberland Presbytery, July 10, 1928

On June 10, 1925, The United Church of Canada was formed by the union of the Congregational, Methodist, and the majority of the Presbyterian Churches in Canada. The churches in Cumberland County became part of Cumberland Presbytery and the churches in the Moncton area made up Moncton Presbytery.

In 1966, Moncton and Cumberland Presbyteries were combined to form Chignecto Presbytery which  held its first preliminary meeting on June 29, 1966 at Sackville United Church.

The member churches of Chignecto Presbytery have had a long history in the region and their 200 plus years of commitment and dedication to the work of the church is something that will continue on for years to come. 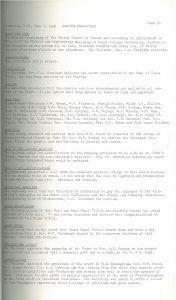